Germany campaigns for gender equality and the protection of women's rights in various UN bodies. Since 2019, Germany has again been a member of the Commission on the Status of Women. Previously, Germany was a continuous member from 1997 to 2017.

Gender equality issues and women's rights are discussed in various United Nations (UN) commissions, programmes, funds, specialised agencies and human rights committees. Germany is committed in these bodies to ensuring that the needs and interests of women are continuously respected, to promoting gender equality and protecting women's rights.

Today, the UN Women's Rights Convention (Convention on the Elimination of All Forms of Discrimination Against Women) is considered to be the world's most comprehensive fundamental legal instrument to protect the human rights of women and has been ratified by 189 states. It was adopted in December 1979 by the General Assembly of the United Nations and entered into force in 1981. The Convention was the first comprehensive international human rights instrument prohibiting the discrimination against women in all areas of life and requiring states to take proactive measures to guarantee the legal and actual equality of women and men.

This applies to all areas of society such as politics, education, family, work, business, social and cultural matters as well as legislation. Germany ratified the Women's Rights Convention in 1985 and implemented it into national law. The member states are obliged to regularly inform the Committee on the implementation of the Convention (Committee on the Elimination of Discrimination against Women, CEDAW) at national level by means of periodic country reports and hearings. The implementation process in Germany is additionally accompanied by continuous dialogue between the Bundesregierung (the Federal Government) and civil society.

Since July 2013, Phumzile Mlambo-Ngcuka, the former vice president of South Africa, has been the organisation's Executive Director. UN Women's third Strategic Plan covering the period from 2018 to 2021 includes the following priorities for UN Women's work:

UN Women has, among others, national committees in twelve countries that support its work. The Committees are linked to UN Women in New York through a recognition agreement and thus officially have the mandate and obligation to raise public awareness of UN Women's work to promote gender equality and strengthen women's rights. UN Women Nationales Komitee Deutschland e.V. is the German national committee supporting UN Women's mission.

UN Commission on the Status of Women

The Commission on the Status of Women (CSW) is the United Nations' principal body dedicated to the promotion of gender equality. It was established as a functional commission of the United Nations Economic and Social Council (ECOSOC) already in 1946.

In its work to promote women's rights, the CSW sets benchmarks for drafting international agreements which aim at eliminating discriminatory laws, raising global awareness of the needs and interests of women and supporting the continuous codification of women's rights. The CSW's mandate has been expanded over time. The Commission is responsible, among others, for reviewing the implementation of the Beijing Platform for Action - a comprehensive roadmap for achieving equality between women and men, which was adopted at the 1995 United Nations Fourth World Conference on Women in Beijing.

The CSW, along with ECOSOC and the General Assembly, is also in charge of UN Women's normative work. It has 45 members, which are elected by ECOSOC based on regional aspects for a period of four years. Germany was a continuous member of the Commission on the Status of Women from 1997 to 2017 and has again been a member since April 2019.

In its resolution 1325 adopted in October 2000, the United Nations Security Council stressed the important role of women in peacekeeping and conflict prevention. The resolution defines political guidelines for a gender-responsive peace and security policy. Resolution 1325 is guided by the understanding that wars and other armed conflicts affect women and men differently and that women are often particularly affected by the impact of these violent disputes.

Against this backdrop, resolution 1325 urges the Secretary-General and Member States to raise awareness of these issues among all military staff and security forces engaged in securing peace and resolving conflicts, to prosecute those responsible for war crimes against women, to take special measures to protect women and girls in war zones, and to include more women in peacebuilding missions, in peace negotiations and during reconstruction.

In January 2017, the Federal Government adopted the "Aktionsplan der Bundesregierung zur Umsetzung von Resolution 1325 zu Frauen, Frieden, Sicherheit des Sicherheitsrats der Vereinten Nationen für den Zeitraum 2017 bis 2020" (Action Plan of the Federal Government on the Implementation oft United Nations Security Council Resolution 1325 on Women, Peace and Security for the Period from 2017 to 2020, NAP II). NAP II builds on the comprehensive approach taken in the first NAP (2013 to 2016) and aims to involve women to a greater extent in crisis prevention, conflict resolution and peacebuilding and to better protect them from gender-specific and in particular sexual violence in armed conflicts.

UN Convention on the Rights of Persons with Disabilities 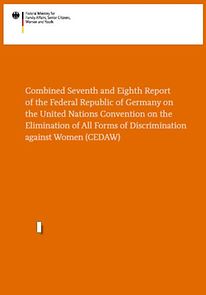